Newfangled is a small home based show "kennel" located in Rural Northumberland. I say "Kennel", that may make some assume we have our dogs in kennels, we don't. Our dogs are very much part of the family and live inside our family home with
myself (Emma), my husband Mark, our 3 sons, 2 Sphynx cats & a Rabbit named Bunderella!

How we fell in love with the breed

It was many years ago when I met my first Newfoundland and it was a wow moment!
I was only 12 years old or so, at the time that I came face to face with what were seemingly two huge bears in somebody's garden. They were just behind an iron gate, each rubbing up against it - blatantly looking for my friend and I to pet them and I just fell completely in love!
In a very strange twist of fate I found myself back at that very same house many years later, on behalf of the Northern Newfoundland Club, performing a home check for the family to re-home a welfare dog. Click here for a link to the NNC Welfare page.

Many years have passed since meeting those two huge bears. I, now living in our own home with my own new family that we quickly decided to get our very first Newfoundland.  Dexter joined our home before we even bought a sofa! Priorities, right?

Sadly, Dexter was not well-bred and as such, as he grew so did his health concerns.  Our baby suffered from hip dysplasia and a front-limb abnormality. His bum grew inches higher than the front, despite our borderline obsessive care! After tracing his  siblings through Facebook we discovered that Dexter was NOT the only one to suffer and in the next five years we continued seeing more puppies from the very same line with HD and ED- puppies unable to walk and in excruciating pain. At this point I became determined to learn as much as possible about the history of the Newfoundland, the standards, genetics, and overall health and well being of this wonderful breed.

Years later, armed with this new-found obsession, led us to the showing/exhibiting and handling of our dogs at the Championship Show Level and eventually breeding our very own Newfangled Newfoundlands.

Please feel free to check out "Our aim" and "past litters" tab to read more about our breeding.

Pictures of Dexter below- our very 1st Newfoundland. 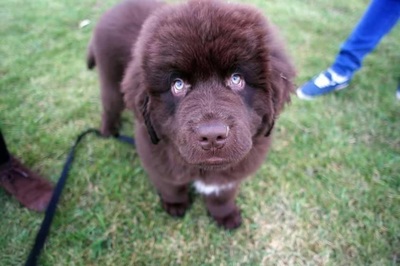 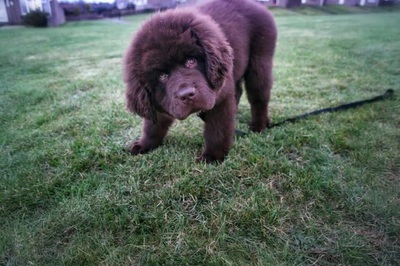